He was 10 years old when his mother died from Lymphoma.

Last year he was awarded the Nobel Prize for his ground-breaking work on Immunotherapy as a revolutionary new cancer treatment. 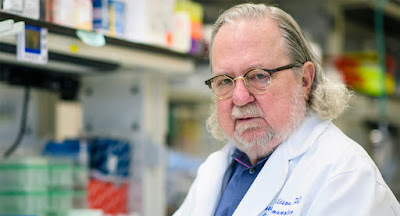 In a nutshell, immunotherapy is all about freeing the immune system to attack tumors. Specifically, Dr. Allison's work takes the brakes off  the T cells, the "soldier's" of the immune system, allowing them to battle invading cancer cells.

His work has led to the development of a class of drugs known as checkpoint inhibitors.  One drug, called Yervoy, has been approved for late-stage melanoma, and has already yielded unprecedented results.  20% of the patients with advanced melanoma cancer now live for at least 3 years, and many live 10 years or longer. That's beyond exciting news!

Dr. Allison feels that immunotherapy is quickly becoming the "fourth pillar" of cancer therapy, joining the traditional treatments of surgery, radiation and chemotherapy. 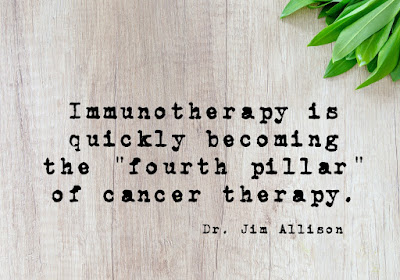 And while immunotherapy doesn't replace traditional treatment, it can be used in conjunction with chemotherapy and radiation to offer patients a strong offense in the cancer fight.  And one other exciting aspect of immunotherapy is that it appears to continue working even after treatment has stopped.

Research continues to investigate treating other cancers with this new type of immunotherapy.  These clinical trials offer a hope that is desperately needed on the cancer battlefield.

We are holding our breath to hear that pancreatic cancer has been spotlighted... so far, the research has focused on lung, kidney, bladder, gastric, liver, cervical, colorectal, head and neck, and lymphoma cancers.

The excitement is not lost on Dr. Allison:

"It's a great, emotional privilege to meet cancer patients who've been successfully treated with immune checkpoint blockade.  They are living proof of the power of basic science, of following our urge to learn and to understand how things work."

That 10 year old boy channeled his loss into extraordinary gains in the fight against cancer.

The president of MD Anderson, Dr. Peter Pisters, believes that "Jim Allison's research has led to life-saving treatments for people who otherwise would have little hope."

And that's some exciting news for the cancer fight!