It has been the sweetest honor to cross paths with Glenn and Cheryl... they are the kind of friends that make life better just by being in it!  We shared farming stories, smiles, cancer treatment strategies, and hope... always hope...

Losing Cheryl to pancreatic cancer was a grief that could have crippled Glenn.  I think for awhile it may have... a breaking heart can never mend whole, there are always the sacred scars born of such a deep love.  But Glenn found a very meaningful way to honor her memory, just as in life, he walks out his love ... and with it, he is paying it forward in the most beautiful of ways!

Here is an excerpt from myFarmLife that shares Glenn's story:

For more than 30 years, I have dealt exclusively with McKeown Motors in Springbrook, ON, for all my Massey Ferguson equipment needs. I consider the owners, Bill and Grace McKeown, to be good friends. They have always gone out of their way to be sure I received the best service. I recently needed their help to make a dream come true. They didn’t let me down.
It started three years ago, prior to when my wife Cheryl passed away from pancreatic cancer. When she went for treatments at Kingston General Hospital (KGH), we had to go through the paediatric cancer unit to get to the area for adults. It broke our hearts to see the young children suffering, crying and clinging to their parents. She said that if we had enough money, she would like each child receiving cancer treatments to get a cuddly plush animal. This July 6th was the fourth time I’ve been to KGH to deliver “cuddlies” for the children in the cancer ward.
Last year, the head nurse told me there were 30 children, so I bought 30 cuddlies and anonymously delivered them to the ward. One little guy, Marcus Hacault, then four years old with stage four cancer, chose his favourite character, Clifford, the Big Red Dog. It brought him such comfort, and he wanted to write to the person who sent it.
The hospital forwarded the note to me, and I wrote back through the hospital. Addresses and emails were then exchanged. Since then, Marcus and I have become friends for life, brought together by tragedy.
When Marcus was in Toronto for treatments, he and his mom passed some of the time by keeping in touch with me by email. Marcus would ask about my farm near Flinton, Ontario, specifically the cows and calves I raise, how many there are (typically 25) and what games they liked to play. He then decided to name the six heifers and six steers, and every time a new calf arrives, I let him know what we have and names arrive.
Marcus has wanted to come to the farm to see the cows and calves, as well as ride in my new tractor, an MF4708. He hasn’t been able to make the trip, but when my new tractor arrived at McKeown Motor Sales last week, a plan formed and I spoke to Bill McKeown about it. Without any hesitation, he generously agreed to ship the new tractor on a trailer to Marcus’ home in Kingston. When Bill Cooke, an equipment salesman, heard about the plan, he volunteered to do the driving.
What a day it was. The sun was shining and some very excited children awaited our arrival. Marcus and all his siblings got a ride in the tractor and ate homemade peanut butter cookies on the lawn. Before we left, Bill Cooke presented Marcus with a child-sized replica pedal tractor. When we pulled out, he was still riding it around and around in the driveway. Marcus says he shares his tractor with his sisters, and the boy next door comes over for a ride periodically.
The Hacault family lives outside of Toronto. That distance creates some hardships, in part because they don’t have family nearby, so they felt it was pretty special that complete strangers were the ones who reached out to them in their time of pain. The day we took the tractor over was exactly one year from Marcus’ initial diagnosis. 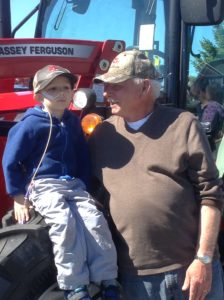 Marcus’ dream came true because of the goodness of a few people. I don’t think anything could make your heart feel fuller than seeing the smile on a little guy’s face who has bravely battled so much. The McKeown “family” and I share the belief in paying it forward and finding ways to make a difference in people’s lives. This event for Marcus is just following through on beliefs, following our hearts and making a little boy’s dream come true.

Thank you Glenn for bringing smiles to the least of these.  You, my friend, are simply the best!  Cheryl would be so proud...

Blessings to you today,
Always,
Jane 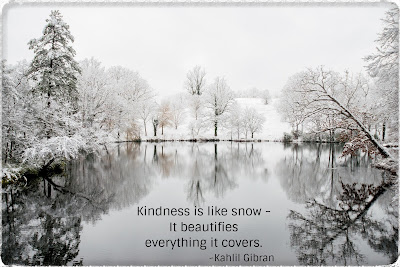 Email ThisBlogThis!Share to TwitterShare to FacebookShare to Pinterest
Labels: kindess

We're thawing out from the latest ice storm here in north Texas... to be sure, I thought we might have dodged winter's frozen grasp this year, but not so fast!

And while the ice has wrought much havoc across the region, it is undeniably beautiful, creating a magical winter wonderland around every turn... 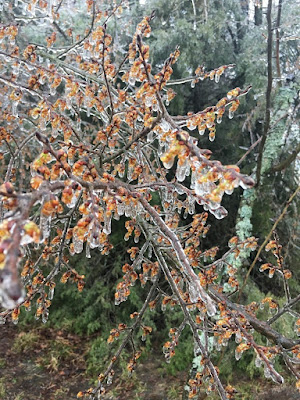 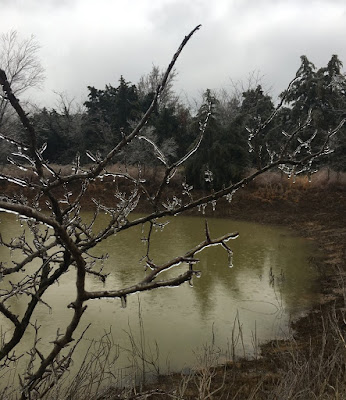 The cedar boughs struggled with the added weight of ice and sleet ... 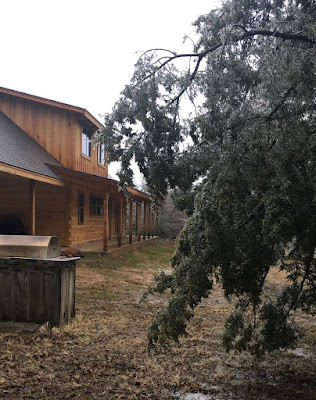 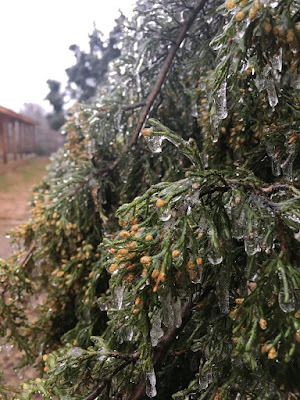 And ultimately some lost the battle! 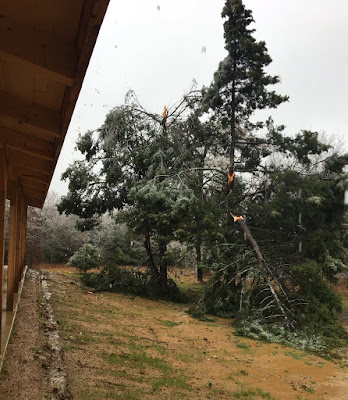 Firewood for next winter... it is life's circle for every season... 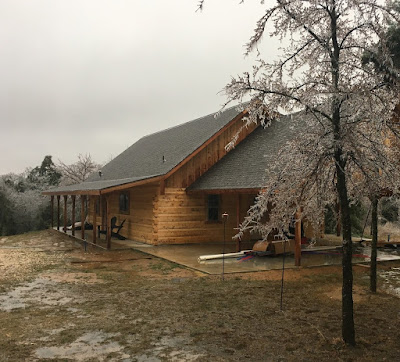 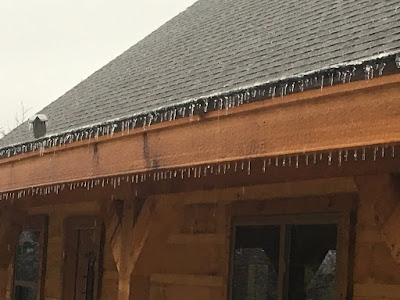 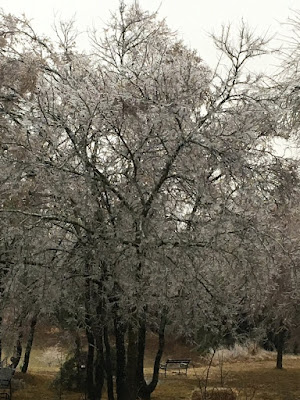 And here's the crazy thing... while we had all the makings of a major ice storm, the roads remained relatively free of ice.  The school and city closures were mostly due to lost power.
And for many it was days before power was restored.
Grateful beyond words for our steady little solar-powered system.
Who knew we'd have so many reasons to fall in love with our off-grid homestead?! 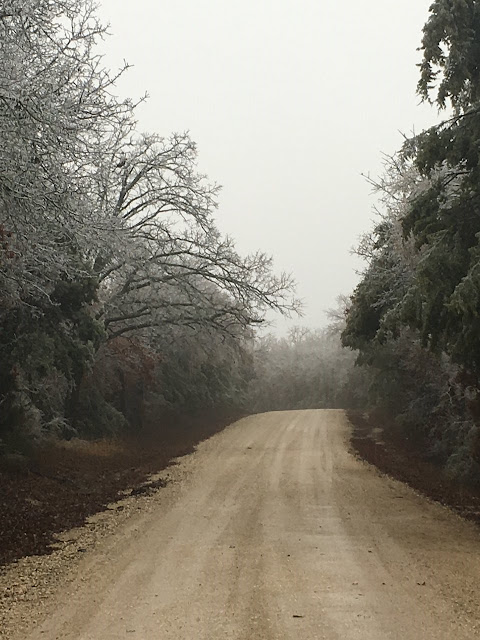 Even though the roads were not dangerous in our rural neighborhood,
the ice-y mayhem was evident everywhere... 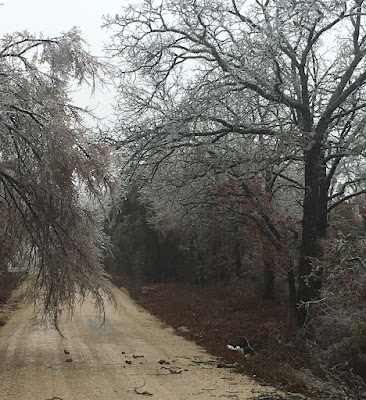 Layers and layers of the frigid ice found weak spots in the strongest of trees... this tall elm has stood for years along the gravel road, but hid an awful truth, for she's hollow from stem to stern, no match for the weight of the deceptively fragile ice. 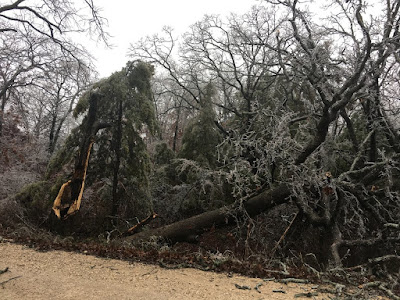 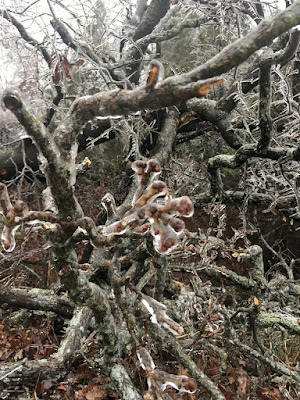 The lazy green pastures of summer take on a quiet, ethereal feel,
frozen by winter's touch. 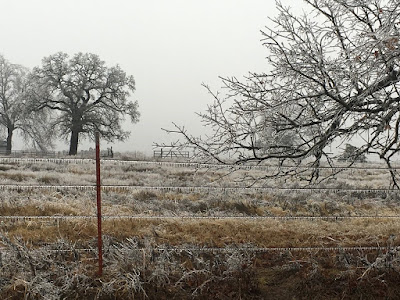 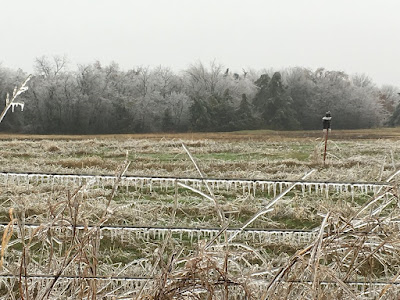 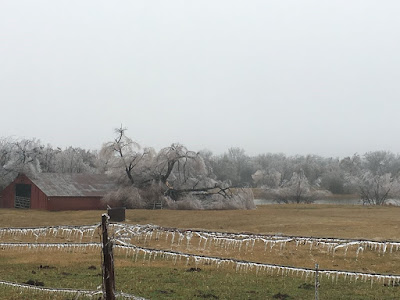 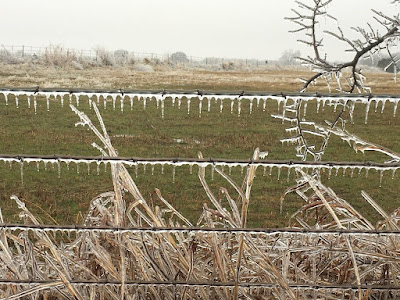 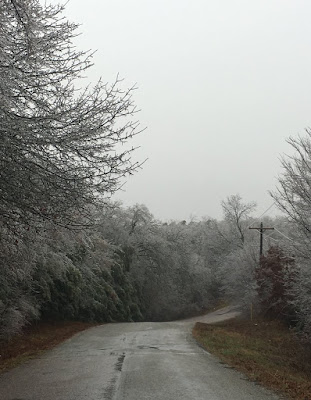 And then we came to the end of the road...
this tree hasn't snapped yet, but my, it makes for a fine road block! 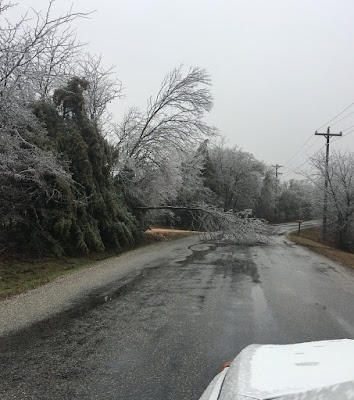 Time to head home and cozy up to the fire
with some hot chocolate and a good book! 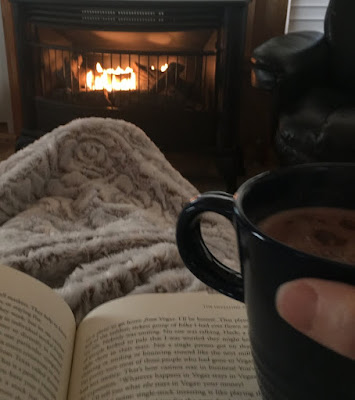 Our recipe for the perfect winter day! 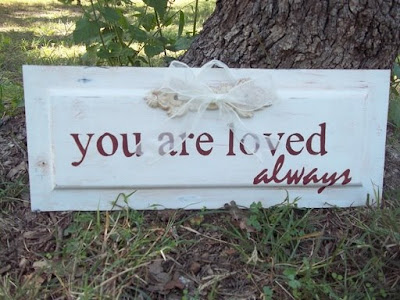 You are always, always Loved!