Lessons learned from a FireAnt Hill...

As if to compound an already horrific situation , the people of south Texas have survived Hurricane Harvey's fury only to find themselves under water, and at the mercy of huge floating piles of hungry fire ants... Can you imagine anything more diabolical??! 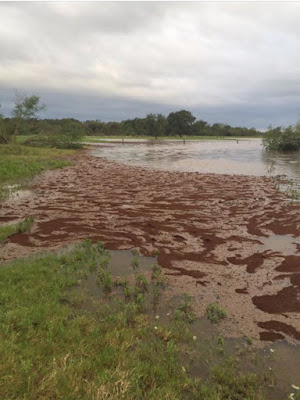 All that rust-colored "debri" in the water?  Those are floating piles of fire ants!!!! 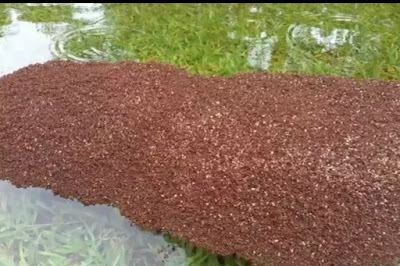 And for those friends who are not familiar with this Texas pest, they are pint-sized little terrors.  A bite from one of these miniscule bugs will sting like fire... hence the name... stings like fire I tell you!  And you won't be in Texas long before gaining a healthy respect for these blasted critters.

Thanks Hurrican Harvey!  An ecounter with one of these floating ant hills you left behind will be sure to ruin our day!  Unbelievable!

Truly, it is almost as terrifying as finding a snake (or two or a hundred!) on your boat... 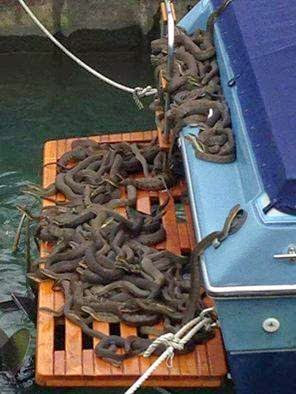 (Surely this picture is photoshopped... I have no idea... but I apologize for any nightmares that may ensue... can't even breath... just stop already!!)

Ok, but back to the floating fireants... it's one of those phenomens of nature that defies logic. Well, if you are a scientist you could explain all about their little waxy bodies repelling water and their ability to float while hooking their little legs together...yada, yada, yada... they are still tiny little terrorist bugs that you want to avoid at all costs.

The only upside to the floating fire ant piles is that you can see your opponent, hopefully, long before you get too close.

Because in their natural environment... like our lake place... they build huge fire ant homes and live underground.  Well, that is until you disturb them.  Like with your foot, or your boot... or a stick. We kind of know. It's happened... 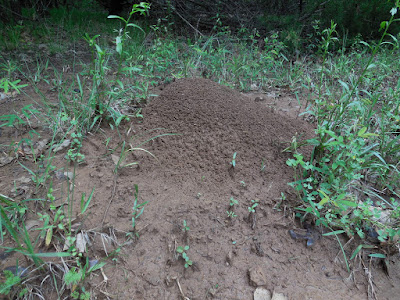 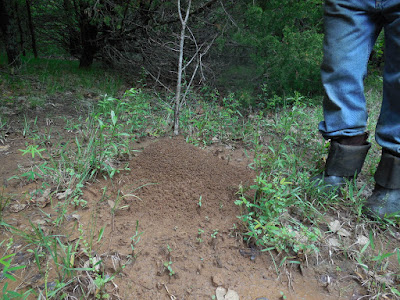 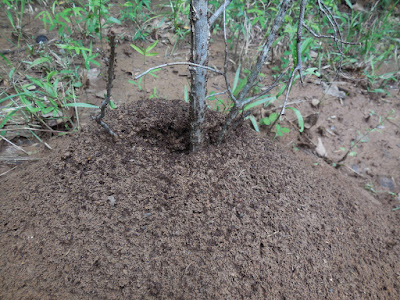 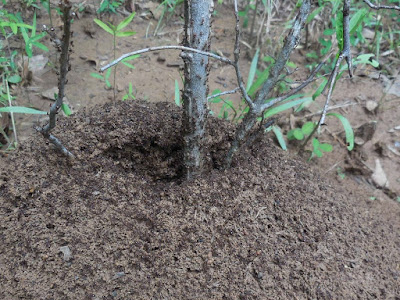 And this fire ant hill is a solemn reminder of the way cancer hides underground, growing and growing until it finally erupts with a venom that is terrifying.

A cancer diagnosis is sucker-punch scary.  It can knock the wind right out of your very lungs and overwhelm your fragile heart with a stinging fear.  The attack is relenteless, and seems to be nightmare-never-ending...

But there is Grace.  There is Hope.  You will find your footing.  I promise you.

You will begin to move forward.  Into the fight.  Back into the living, shaking that paralyzing shock.  Give yourself time.

Lean into family and friends.  Do your research.  Trust your gut.  Then get out the Amdro.

Well, that's what we call it in Texas.  Amdro.  Amazing, Amazing Stuff... When we see those growing fire ant mounds, we go on the attack first before they do. 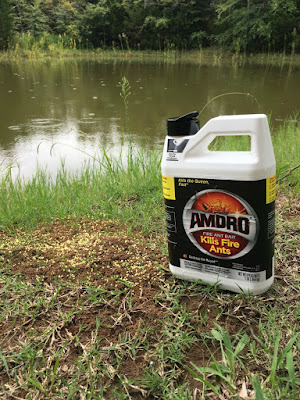 Amdro is a smelly pellet that fire ants seem to love, go figure.  They take this smelly pellet down deep into their underground home and feed it, like the finest elixir, to their queen, and the next thing you know... deader than a doornail. Yay!

But the thing is, we have to be disciplined and vigilant. And treat the mounds with Amdro early. Or we'll end up walking thru that fire ant mound and get the snot stung right out of us (Texas-speak for lots of swearing and jumping up and down).

So that's the lesson learned from the fire ant hill.  No matter what we face in life...

Learn all you can about your opponent.   And don't be afraid to fight with everything you've got.

Trust me, we're Getting Out the Amdro down here in Texas!

{Sure hope it works on floating piles of fire ants!}

When we need an anchor in the midst of our storms... 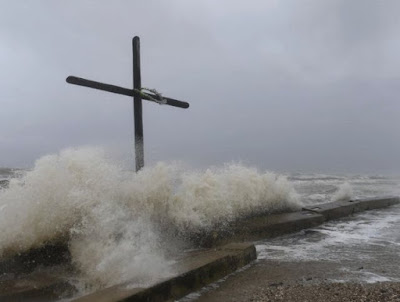 
Lifting up all in the path of Hurricane Harvey and the devastating aftermath. May God's Protecting Hand hold all safe, in the eye of the storm, until the fury passes and the sun returns... 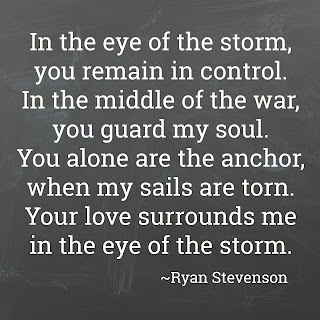 Y'all.  There was a total eclipse of the sun today!  Just in case you haven't heard about it yet...

Because I know that some news stations may not have carried the exciting news.  You know. Like they were living under a rock or something.

And it was crazy.  We were all telling each other 'Don't Look at the Sun.'  To be sure, that's good advice, but really?  Since when do I have to tell my peeps not to look at the sun?  You'll burn your retinas I say... I've never said that before, just wanted you to know.  I'm not a helicopter mom or anything.

But, truly, what a day!  We just had a total eclipse of the sun... well, we didn't have one here in North Texas.  It was just a partial eclipse.

The moon only blocked out 75% of the sun's glow.  And we sure waited for the moment we'd shiver in the dark... until we realized that the sun has the power of a kazillion mega-watts, even at 25% power! Who knew?

And so, here are the highlights of our exciting day... 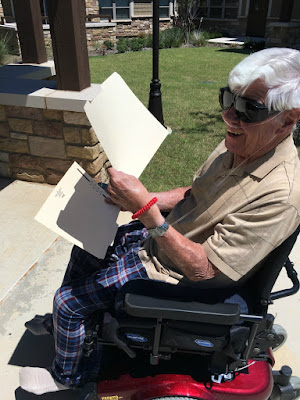 Getting Poppy into position with our far-from-sophisticated Solar Pinhole Viewing Contraption...
Good news, he did not look directly at the sun. 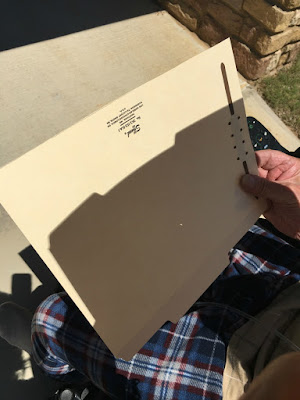 Ignore the crude file folder and feast your eyes on that pinpoint dot! 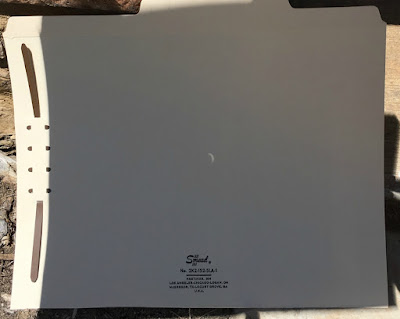 It is a Solar Eclipse happening, for real! 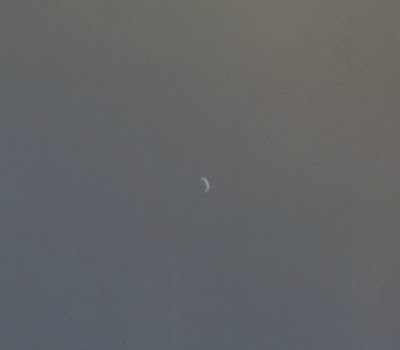 And we didn't burn our retinas... because, we followed NASA's brilliant guidelines and DID NOT LOOK AT THE SUN!

But then I couldn't resist a selfie with the Eclipse... 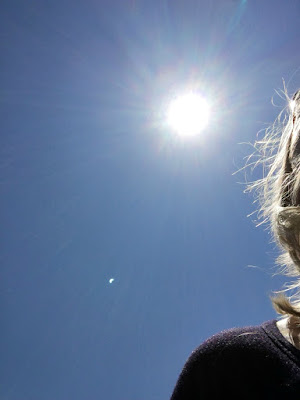 But we all know my dismal selfie-abilities... thank goodness, my back was to the sun and my trusty  phone camera has a flip mode.
(Eyes were never in jeopardy, do not fear)

And that is a picture of the sun at full eclipse in North Texas.... Hmmm....
If I only knew what that little half moon blip was in the lower center of the frame...
maybe Venus?  or Jupiter?  or the Gorgeous North Star?

The astronomer in me has no idea.

But I do know that in the year 2024, North Texas will be in the path of Totality for the next Big Solar Eclipse!  I feel a party coming on...

I Have this Hope


Because, sometimes, we need to be reminded...


When it feels like the night will never end..

Resolving to Trust His Grace...


"In the flood or fire, You're with me and You won't let go."
~ Tenth Avenue North